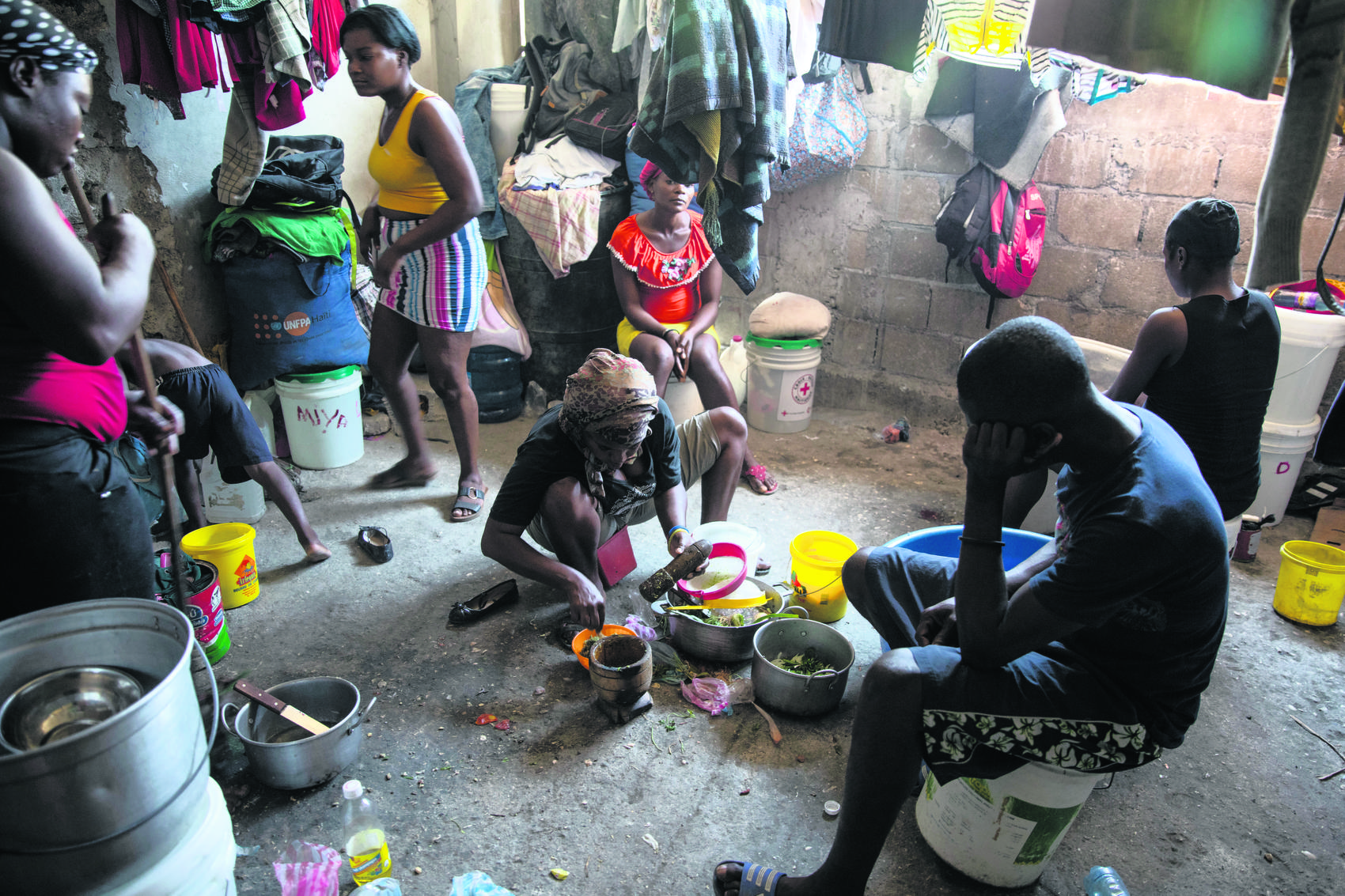 In a scene that has become increasingly common in Haiti, a woman prepares food at a shelter for families displaced by gang violence in Port-au-Prince. A spike in violence has made the situation even 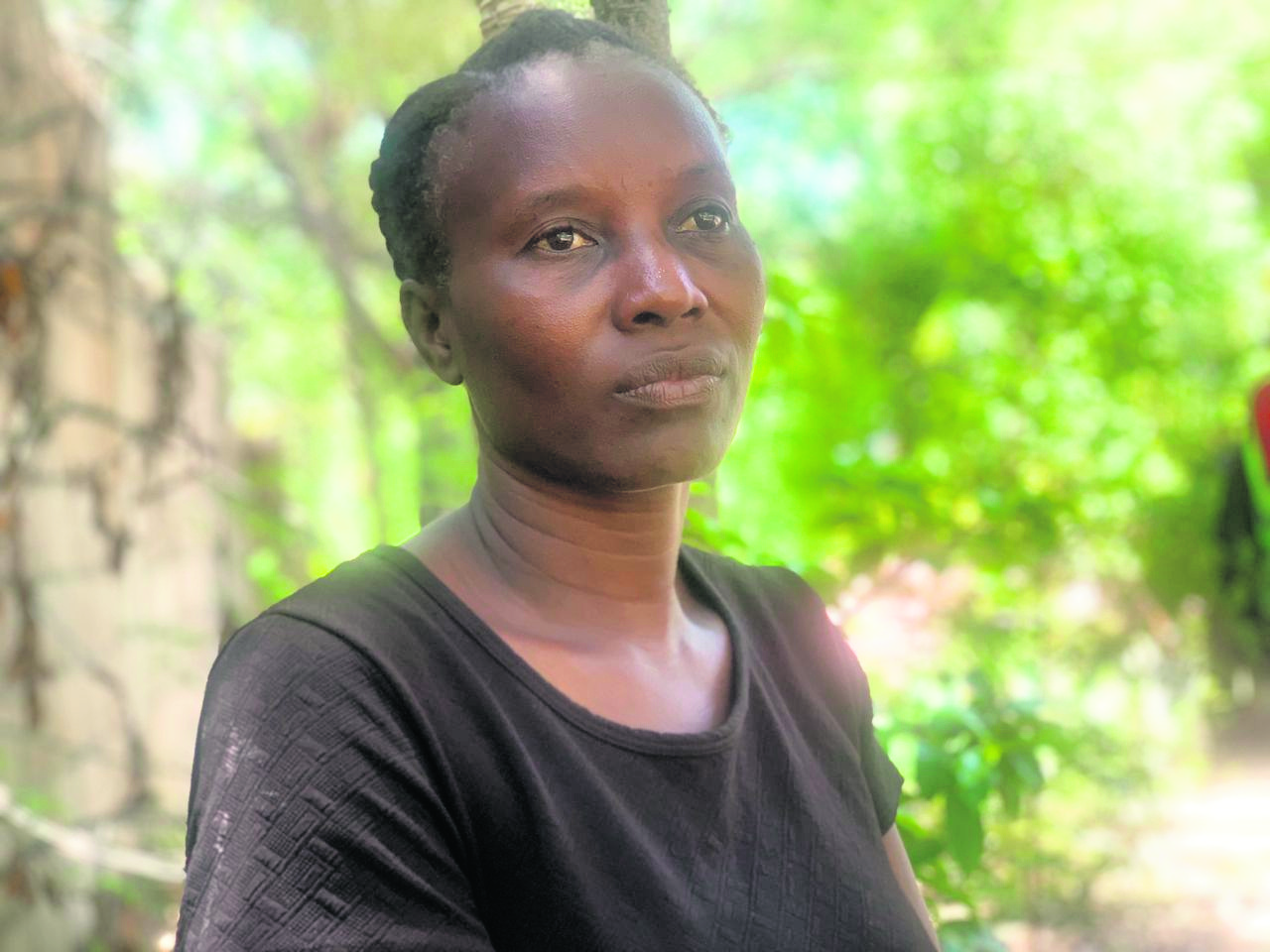 Madeleine Célicourt and her children left Cité Soleil in July because of unrest. She relies on humanitarian aid for food. 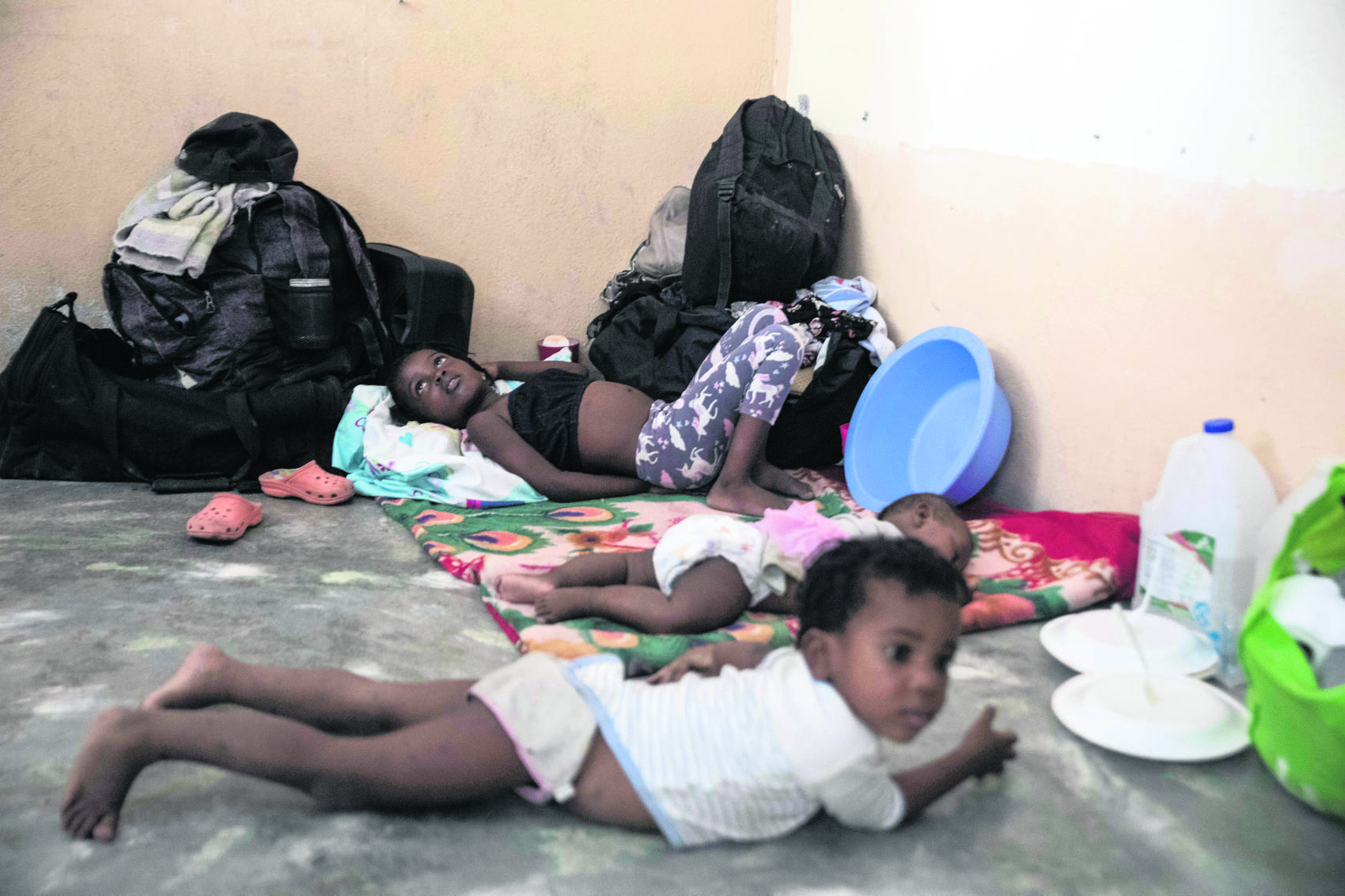 Children rest in a school converted into a shelter after they were forced to leave their homes because of gang violence in the Tabarre neighborhood of Port-au-Prince.

For weeks, Madeleine Célicourt and her children have taken refuge inside a school in Port-au-Prince, finally finding some peace — and hot meals — since a deadly gang war in Haiti’s largest shantytown forced them to flee last month.

But with the new school year starting soon, she and others like her will have to leave — unsure of not only where they will sleep but how they will feed their children in the coming weeks.

“We have nowhere else to go,” Célicourt said. “We have no blessings, no family, no support system.”

Célicourt’s kids are the faces of Haiti’s latest crisis, where 1 in 20 children in Cité Soleil, Haiti’s largest slum, are “at risk of dying from severe acute malnutrition” due to a lack of health services and food, according to UNICEF.

The statistics are even grimmer for children under 5 years old: About 20% in the area suffer from severe or moderate acute malnutrition — five percentage points above the emergency threshold set by the World Health Organization.

Célicourt, 45, and two of her three children, Robens Remy, 11, and Manuela Remy, 10, were evacuated to a center at St. Paul de Chartre, a school located in the Delmas 31 neighborhood, with the help of a French nun, Sister Paësie Philippe, who organized several risky evacuations through her organization, Famille Kizito.

In the weeks since, the evacuated families have relied on donations from the United Nations World Food Program. The humanitarian organization has delivered a variety of boxed meals twice a day, as well as rice, beans and cooking oil.

“Today, I think of God because if it wasn’t for Sister Paësie and if it wasn’t for the World Food Program, we would have difficulty finding food,” Célicourt said. “Even if the situation is not great, it’s better than us dying out there.”

Sister Paësie, who has spent more than 20 years working in Haiti, said deep poverty and hunger are not new for the 93,000 children in Cité Soleil, but last month’s violent gang clashes have made the situation worse, leaving the children more vulnerable than ever.

Since 2019, gang warfare has eliminated activities in local markets, preventing mothers from selling and buying products to cook.

In the wake of this new conflict, which left more than 471 dead and injured between July 8-17, according to the United Nations, Famille Kizito has rescued and relocated more than 800 children. They were taken to several religious schools in Delmas to be temporarily housed.

Now, they face a new challenge. The children and families who had been sheltering at St. Paul de Chartre and other schools have been told they need to leave, raising concerns about their housing and food.

“We have already sent some children back in the last few days, and unfortunately, they are practically returning to the same situation,” Sister Paësie said.

Humanitarian officials are expressing growing concerns about the effects of Haiti’s multiple crises on the already dire food shortage.

“The situation is really becoming difficult, impossible for the most vulnerable families to survive in such conditions,” said Bruno Maes, UNICEF’s Haiti representative. “We try to do our best with mobile clinic services for the moment, but tomorrow the situation will persist.”

In recent weeks, the organization said it has screened 9,500 children for malnutrition in Cité Soleil, and 1,920 received lifesaving treatment. UNICEF blames the upsurge in gang-related violence that not only caused hospitals in the area to shut down, but also prevents the safe movement of residents.

The World Food Program said at least 4.5 million people in Haiti are experiencing severe hunger, including 1.3 million in need of emergency assistance. With inflation close to 30% this year, food prices in Haiti have risen more than 50%.

“I know that there are children who eat every two days — even every three days, meaning they might have a dish of rice one day and the next day they go to buy small snacks, what they call marinade,” said a religious leader who works with the population in Cité Soleil and asked that his name not be used because of safety concerns. “And then there are times when there is nothing to eat, and the parents give them water with sugar so that the child does not cry and falls asleep at night.

“And we see the thinness of the children,” he added. “There is malnutrition — undernourishment — which will have definitive effects on some children and their intellectual development. It is always the poorest ... and it is painful to see.”

The concerns over hunger aren’t limited to children in the slums.

Seven-year-old Entha is among thousands of children suffering from hunger in Haiti’s southwestern region, where a deadly earthquake killed over 2,200 people a year ago. Her village in the Tiburon Peninsula near Petit-Trou-de-Nippes, about four hours west of Port-au-Prince, suffered severe damage, and then was flooded days later by Tropical Storm Grace.

Before the earthquake, Entha’s mother, Edlène, used to buy rice, spaghetti and other products to feed her husband and three children.

But after losing her home, possessions and crop field, Edlène no longer has money to invest in goods to sell in the local market. And the roads are destroyed, making it difficult for her to get to the market to buy food.

Entha said that she has been so hungry lately that it prevents her from going to play with her friends.

“I can’t eat when there’s nothing,” Entha said.

With more than 100,000 houses destroyed or damaged during the disaster, a lack of food remains a pressing need for people in the southwest. The U.N. Office for the Coordination of Humanitarian Affairs estimated approximately 650,000 people of the 800,000 people initially affected by the quake, including 340,000 children, are in need of urgent humanitarian assistance.

Save the Children, a nonprofit organization, says “hunger is becoming a norm for children” in Haiti, and that it can hinder their mental and physical development, increase their risk of contracting life-threatening diseases, and ultimately lead to death.

“They’re dependent on the adults to provide them with the food, so they are the most at risk every time there’s a crisis,” said Chantal Imbreault, the Haiti director for Save the Children. “But their families don’t have access to food or balanced nutrition.”

According to the Integrated Food Security Phase Classification, which classifies the severity and characteristics of food and nutrition crises around the world, the four main areas in Haiti that are in emergency need for assistance are the coastal part of the South department, the lower North-West, the highlands and the very poor neighborhoods of Cité Soleil. The rest of the country remains in food crisis as well.

Imbreault warns that although the country is not yet experiencing famine, the situation could easily head in that direction.

“Should there be another big hurricane that hits Haiti in the next few months, we could end up at level five,” Imbreault said. “This is very severe. So, it’s very important to address the issue.”

Since the devastation, Save the Children said it has deployed a team to respond to the needs of children and their families in the worst-affected areas in the South and Grand-Anse regions, including emergency education, protection, water and hygiene, health and nutrition programs, and cash assistance for more than 100,000 people.

Entha’s family received several rounds of cash assistance, according to the organization, to cover their primary needs. But many others in the southwest still go hungry daily and need materials to rebuild.

While many children in Haiti rely on school food programs, UNICEF said that more than 250,000 children in southwest Haiti lack access to adequate schools.

“At the end of last year, UNICEF requested $97 million through the 2022 humanitarian appeal for children to reach 950,000 people, including 520,000 children in Haiti,” Farhan Haq, deputy spokesman for the U.N. secretary-general, said Friday at U.N. headquarters in New York. “To date, UNICEF has only received 30% of the funding needed.”

He said that of the $373 million needed, only 14% of Haiti’s Humanitarian Response Plan is funded.